Take 2: 9 obnoxious jargon examples you need to expel from your vocabulary

Last year, we wrote a heartfelt response to the proliferation of tech jargon. Words so nauseating and overblown, we felt it was our civic duty to draw attention to these cretins of the word world, point our fingers and hysterically yell ‘j’accuse!’

We received much love for the article - and discovered that our list has been everything but exhaustive, not least because language is ever evolving. Jargon, in particular, is like the hydra’s head. Each time you knock one down, several more take its place more menacing than before.

In the time between these articles, we’ve felt the need to come forth again and examine the latest monstrosities invading our meetings and creeping into our lunch-times. We’re trawling through the swampy underbelly of the English language, so you don’t have to. If you dare, see below for nine more examples of tech jargon that must be stopped.

Use in a sentence: ‘We are going to need to deep dive on this stage of development. This means we’re going to have to move the presentation back (inaudibly: to next year).’

We start off with a supreme euphemism. Taking a deep dive means that you need to go away and really consider elements of a project in a profound and studied way. What you really mean to say is: ‘I desperately need to buy more time to try and turn this ill-fated car wreck around.’

What you could say instead: Look, we’re not quite there yet. Or if the situation is truly dire, learn how to repeatedly blink ‘SOS’ in morse code.

Use in a sentence: ‘We were bootstrapped until 2015, then we did some serious growth hacking. Boom town.’

This word is misleading. You think it’s got something to do with a Victorian cockney insult, then just as you get interested, you realise in a tech context, such a delightful word gets robbed of its charm, only to be replaced with something more sinister (once again, not in an interesting way). In the tech world bootstrap simply means ‘self-funded’

What you could say instead: ‘We were self-funded until we got more momentum and attracted some investors.’

Use in a sentence: ‘In the beginning we had to rely on some serious sweat equity to keep the momentum going.’

Just. Ew. Sweat equity refers to a labour contribution to a project (rather than a monetary one), though it just conjures up the most disturbing and moist of images. Keep sweat on the sportsball courts and off the keyboards.

What you could say instead: ‘We had to rely on the kindness and hard work of qualified people. While we couldn’t pay them at the time, we have ensured that their contribution has been rewarded.’

Use in a sentence: ‘The frothy dot-com market created a lot of opportunity at first.’

While ‘frothy’ sounds like the consequence of a frenzied sweat equity session or an unfortunate outbreak of rabies at a big data startup, it actually means something that’s value is at an unsustainable demand. Like sweat equity, it’s jarring, but also confusing and a bit trite for something that actually has an ominous meaning.

What you could say instead: The dot-com market was untenable. And when the market crashed it did so spectacularly.

Use in a sentence: ‘That social campaign isn’t hitting home runs. We should consider doing a hardcore pirouette.’

Just when we thought we’d seen the last of pivot, we have it’s twirling travesty of a relation. Pirouette is simply pivot with a twist (ha). It’s just a flouncy way of saying ‘change direction’

What you could say instead: That social campaign isn’t working like we’d hoped. Maybe we should consider trying something else.

Use in a sentence: ‘Great proposal. Before we decide anything, let me circle back with Niall and Seth and get back to you.’

If one phrase could sum up everything wrong with corporate culture it would be ‘circle back.’ Circle back means further discussions. Aka more meetings, less resolutions until you realise that you’re caught in a Kafkaesque nightmare.

What you could say instead: ‘Great proposal. Niall, Seth and I will look over it AND MAKE A SOLID DECISION IN A PROMPT AND TIMELY MANNER.’ (Note: Capitalisation is author’s emphasis, not speaker's).

Use in a sentence: ‘That new online car service is seriously uber foxing Uber.’

No, this doesn’t refer to the delightful Chrissy Teigen. Uber fox refers to a start-up company that relies on the reputation of a much more successful company. The phrase is actually fun, but therein lies the problem — it’s not accurate. It really should be uber piranha or uber weasel. 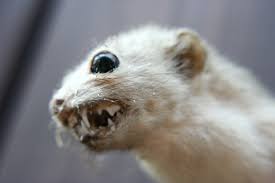 What you could say instead: ‘That new online car service seriously uber weaselling Uber.’

Like certain heroes in a half-shell, some things are better left in other decades. In the most traditional sense of the word a ninja should conjure some pretty rad sword action, not another LinkedIn nerd who refers to their job title as ‘Ideas Guru’ when ironically, they clearly haven’t got a clue. Ninja was fun at the time, but it’s had its day. Same goes for ‘Wizard’ ‘Guru’ ‘Rockstar.’ or any other epithet that is better left in Young Adult fan-fiction.

Use in a sentence: ‘d8AlYfe is home to some true visionaries. Folks that aren’t afraid to create some serious thought schism.’

What you could say instead: ‘d8Alyfe is a company that was founded by a group of people passionate about big data solutions for small business.’

Another year, another batch of words and phrases that need to be extricated from the lexicon. The reason that jargon becomes annoying is its overuse. Some of the above words didn’t start out as jargon, in fact some are quite lovely and descriptive. It’s only when executives feel the need to over pepper their communication with them to sound like they’re still in with the cool kids that they start to feel invasive. The other issue is that jargon really doesn’t clarify anything. In fact, it can be rather confusing, the opposite of what you should be trying to achieve every time you communicate.

Communicating clearly with flair in the tech space isn’t easy. There are a lot of technical terms and the systems and products can be complex and involved, but for tech marketers the challenge is to rise above it and translate their value in plain English to stakeholders, clients and customers. Happily there are many tech companies out there who aren’t only getting their message across, but are doing so with humour, verve and originality.

Great communication is about asking how you can engage, educate and, if you’re really doing the trick, inspire your audience. Cutting out the jargon is just one step on that road. If you would like to know more about how you can elevate your communications and content from good to sublime, download our guide The art of the interview today.

Brand chemistry is a digital marketing agency focused on delivering quality leads and measurable results for our b2b clients. Take a look at our client case studies to find out more.

No tumbleweed here: 5 ways to build a successful LinkedIn group

By Gemma Fahy in Digital experience on January 18, 2017

By Gemma Fahy in Digital experience on January 18, 2017

What is the role of your website in inbound marketing?